It wasn't a motorcycle, but it was a pretty cool ride -Temagami

My BF’s mom and sister were visiting from Germany and my BF came up with the idea of renting a houseboat. It would certainly be something different to experience and none of us had ever been on one. I admit that I was skeptical about going on a houseboat, especially this time of year after having a summer of cold temperatures and massive amounts of rain. Personally, I am not a boat fan, I prefer two wheels on the ground, but you probably have guessed that. (wink) None the less I was on-board with the plan. 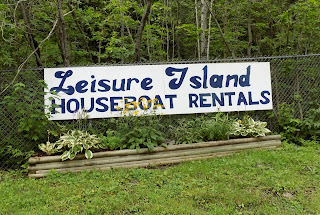 Temagami is about a 2 ½ hour drive from us, making it a perfect location that wasn’t too far to travel to. We booked the 3-day, 2-night trip for the day after Labour day.

We rented the houseboat from Leisure Island Houseboat Rentals The owners Mike & Gwen Drenth were very friendly and helpful. I highly recommend them!

My BF’s sister also wanted to try her luck at fishing, so we ended up having to go back into Temagami to get a fishing license. It was just a short drive back onto the main street and gave me a chance to snap a few pics of the area.


By the way, having to get a fishing license is a rip off, because she was not from Ontario (which would be only slightly cheaper) they charged $25 for 1 day!

Heading Out On Our Voyage
By the time we loaded up the boat with our gear it was around 2 pm. The first thing I noticed was that the houseboat was very clean. It also had pretty much everything you needed, except for a shower. We all missed not having a shower, but we made due with wet wipes and boiling a kettle of water to clean up in a basin. This probably wouldn’t be a big deal in the warm summer months where a dip in the lake could have refreshed one’s body. But hey, it is to be expected to “rough” it a little when you go camping.  The cabin was comfortable enough for the four of us, even though it was somewhat ‘close quarters’.  I had no complaints and found the coziness just added to the ambiance. 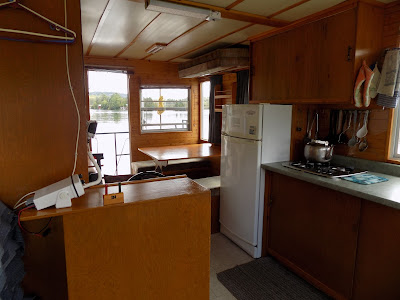 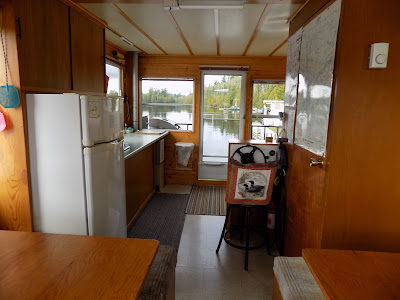 We actually arrived a lot later than we had planned and the overcast sky didn’t look very promising. As we headed out, to our delight the sky began to clear. It actually turned out to be quite a nice afternoon. There wasn’t much boat traffic either. With the kids all back to school, it was the perfect time for our little trip. I was prepared with my Gravol, (motion sickness pills) but I soon realized that houseboats are not like a regular boat at all. Not only are they slow with only a 9 hp motor, they are very steady with minimal rocking on the water. Sure, if a boat passed there was a slight heave back and forth, but for the most part we chugged along gliding smoothly across the water. 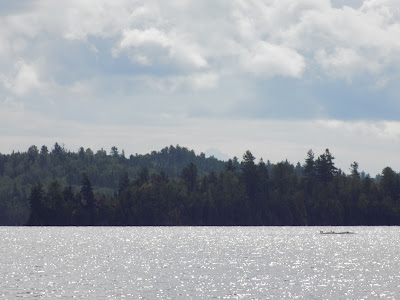 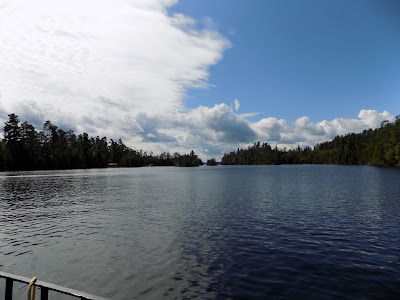 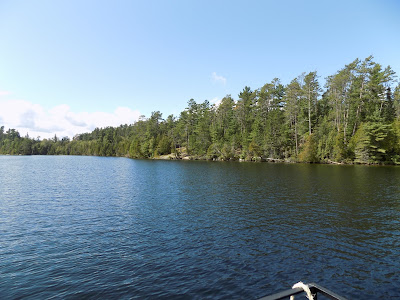 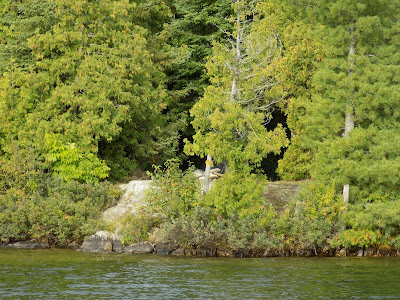 The scenery was breathtaking and dozens of little tiny islands poked out along the way. The buoys marked a clear path where to maneuver around any potential hazards. We had our choice of campsites to dock at, however finding them along the shores proved very challenging. I recommend bringing binoculars! Thankfully we did, but we still had to creep up fairly close along the shores to actually spot those tiny orange diamond shaped markers that were posted on the trees. 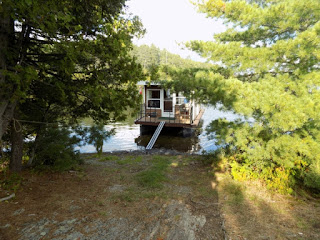 It was going on 5 pm before we pulled up to our first campsite, it was in a slight cove and provided shelter from any wake that a passing boat would make.

After docking we went on land to get a campfire started. There was plenty of dead wood nearby in the thick bush to get one started. We managed to get a nice fire going and were enjoying the spectacular views from the elevated vantage point. 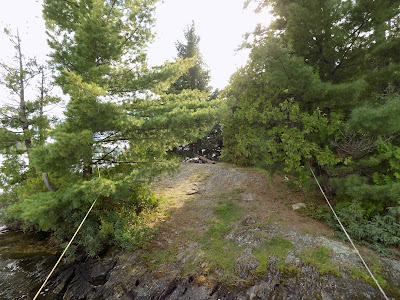 Soon the dark clouds moved in and opened up, driving us to the shelter of the houseboat. The downpour didn’t dampen our spirits and we fired up the BBQ and had supper.
I had visions of my teeth chattering and shivering myself silly all night, but surprisingly the houseboat was well insulated and we didn’t even need to light the furnace.


The next morning brought an amazing sunrise with mist that shimmered off the lake. 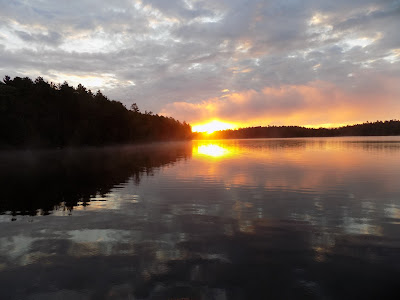 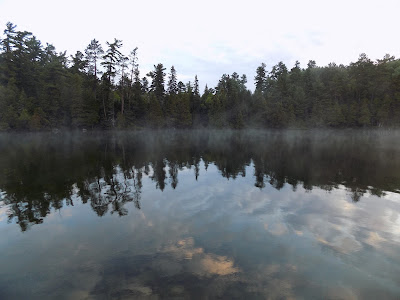 Temagami Island Hike
After breakfast, we headed out again. We were on the hunt to find Temagami Island where there is a hiking trail. We managed to pass the island the first time around but eventually got back on track and found the ‘landing’ site. Keep in mind that you won’t find any sandy beaches here, the shorelines are rugged and rocky. 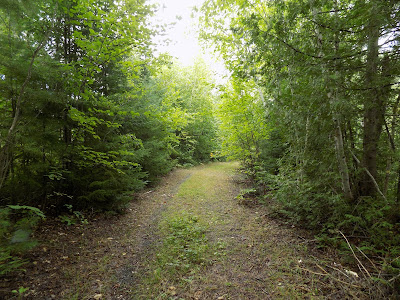 The trail was not really marked as well as the brochure lead us to believe, and our 3-km hike turned into 6 km. In some places, there was a hint of other trails but we kept to what looked like a road instead. Even on this well groomed portion of the trail the markers were sparse and it appeared that we had started the trail backward when we actually encountered one.


The things we passed along the trail were not what any of us expected to see.


However, there were some spectacular views and more natural backdrops to enjoy along the way. 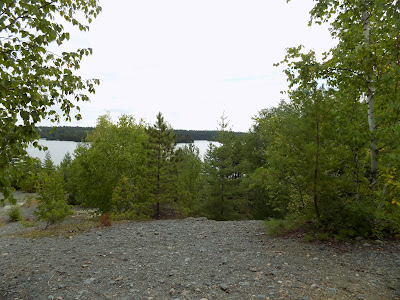 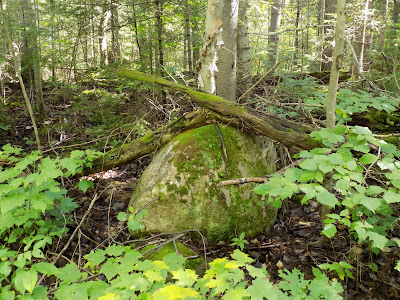 When we arrived at a deserted Summer Camp along the water’s edge we rested on the dock and enjoyed the views.
We tried to find another marker that would lead us back in a loop like the map had described but it became clear that none existed. After following a trail that just led further into the camp we decided it best to go back the way we came to guarantee that we find the houseboat again. 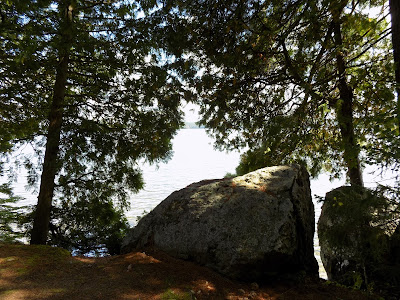 A Poor Choice for a Campsite

Back on-board we chugged along again to search out our next campsite for the night. Navigating was a little tricky, we were told that most cottages would have a ‘T’ number and by identifying these numbers you could judge on the map where you were. Even with binoculars it was hard to read the tiny number signs if you were far from the shoreline. Most docks we passed didn’t even have a number, or at least we never saw one. It became a team effort and in a way, it actually made our journey challenging and fun.
We finally spotted a campsite and shortly after we tied off we realized this spot was a big mistake. We happened to be directly in a major route for boat traffic. (Gwen had warned us about this) We hardly saw any boats up until this point. However, in this spot boats were whizzing by us steadily and our poor little houseboat was being tossed around like a beanbag.  At times, it felt like I was riding a roller coaster. It didn’t take long for all of us to agree that we better move along and find somewhere less travelled.
2nd Night Campsite
Shortly afterwards we found another campsite that was across from Bear Island. Again, the orange marker wasn’t so easy to see, but we managed. Unfortunately, the rain came quicker than we thought, even thunder rumbled around our heads. At least before the rain came I managed to get some nice pictures of the surrounding landscape. 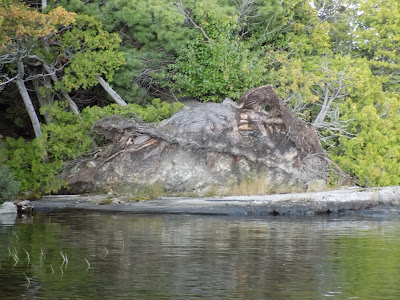 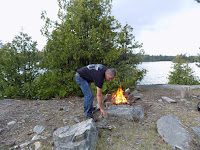 The BF collected some birch bark laying around and lit a small fire just to say that we had a little campfire before it started to rain. 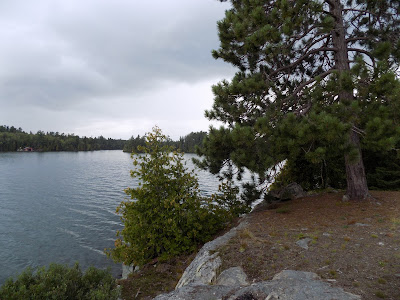 All snug on-board we fired up the BBQ once again and had a nice meal. I didn’t think this spot was as nice as the first night’s campsite. The location had awesome views, but that night I was startled awake by the houseboat banging against the rocky shore.
The next morning was on the chilly side and the sky was threatening more rain. My BF and I sat on the front deck drinking our morning caffeine fix and three ducks came by to visit. He tossed them a bun for their breakfast.  (For the record, I was bundled up and had gloves on)

The Picnic Spot that never was 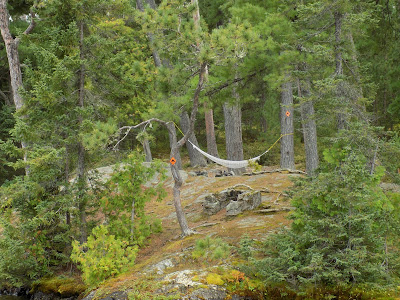 After our own breakfast, we started to head back as our trip was nearing an end. The plan was to have picnic at another campsite and roast sausages over a campfire. We found a nice spot that we had actually noticed on our way up the lake the first day and docked. As we climbed up to the campfire spot the wind had picked up and had gotten quite chilly. Even a fire wouldn’t keep us warm enough in the elevated open area and we headed back to the houseboat. 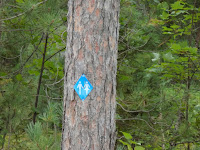 Amenities at this campsite included a Public Washroom Tree!

Journeys End
As we headed back it continued to drizzle on and off and I mostly stayed in the cabin to keep warm. By the time we docked back at Leisure Island Houseboats the sun came out long enough for us to unload our gear. I can’t complain, the weather cooperated somewhat and we were lucky to have had that one full day of sunshine and warm temperatures for our hike. Even the rain we encountered in a way was timed perfectly.

I was surprised that I actually liked it as much as I did, I even managed to be totally unplugged for three whole days! No cell phone, no laptop, I hardly missed having communication with the outside world, I did say ‘hardly’.  I didn’t even have a radio! (In retrospect, it would have been nice to listen to a radio, the silence at times left my ears buzzing). We all agreed that the three-day trip was plenty for us.  The first thing we did when we got home, we all took a turn in the shower! 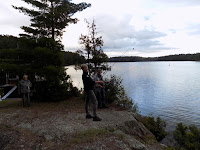 Oh, and no fish were harmed or even caught during this trip.

Even though this adventure wasn’t on a motorcycle, I have to admit, it turned out to be a pretty cool ride.