What could lie behind closed doors...

My obsession with photographing doors…


It really happened quite suddenly, when I went on a trip to Germany last year (2013). We were visiting my ‘honey’s’ family and decided to spend a few days in Italy. In his youth he had taken many motorcycle tours with his buddies to Italy and now he wanted to share with me one of his favourite places to visit.
(Isn’t he sweet J) 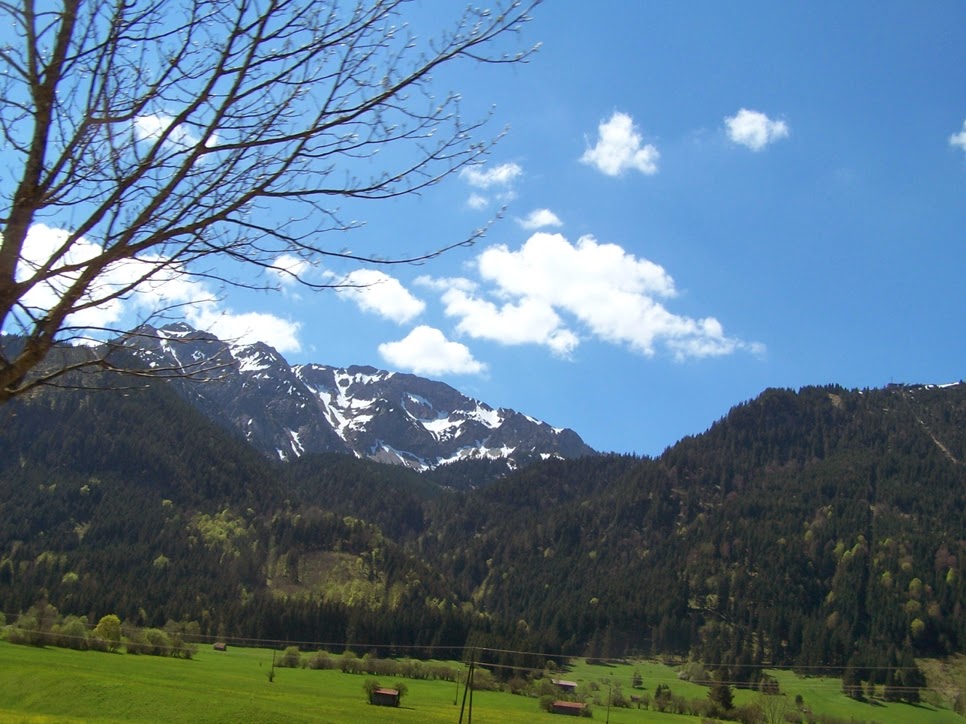 It was spring and the weather was warm as the sun shone brightly in the vivid blue sky, puffs of fluffy white clouds dotted the horizon, you couldn’t ask for a better day to hit the open road. (Scratch that, it could have been better, we didn’t have our motorcycles L ) Europe is an Open Border continent which made it very easy to travel from Germany to our destination in Südtirol / South Tyrol, Italy. (Would be interesting if North America had open borders) It was less than a days drive from where we were staying and we planned to take the more scenic route to get there.

As we drove the winding Fernpass (mountain pass) the majestic scene unfolded before us. All the way I could imagine how great this trip would be if we had been on a motorcycle - so ist das Leben [such is life] – I envied the motorcyclists ahead of us and vowed that one day I would drive these mountains on a motorcycle! (I think my ‘bucket’ list just got a little bigger! )

The glint of the sun caught mountain caps of white
sparkling like diamonds against the light;
The road twisted then turned like a snake in the grass
driving through tunnels turning day into night.

We took a break at the popular Rausthaus Zugspitzblick (translation: look at the mountain - restaurant) and we certainly did as the sign proclaimed! To the right rising into the sky kissing the clouds above it is the Zugspitze berg (mountain). It stands  2,962 m (9,718 ft) above sea level and is the largest mountain in Germany which borders on Austria.

Along the picturesque Reschen Pass you come upon Lake Reschen and the famed 14th century church steeple. It was here that the prosperous village of Graun  once stood, only to be submerged in the man made lake in the 1950’s when the village was sacrificed to make way for a new dam. Legend claims that during the winter you can still hear the church bells ring. (The bells were removed from the tower on July 18, 1950 a week before flooding the area) 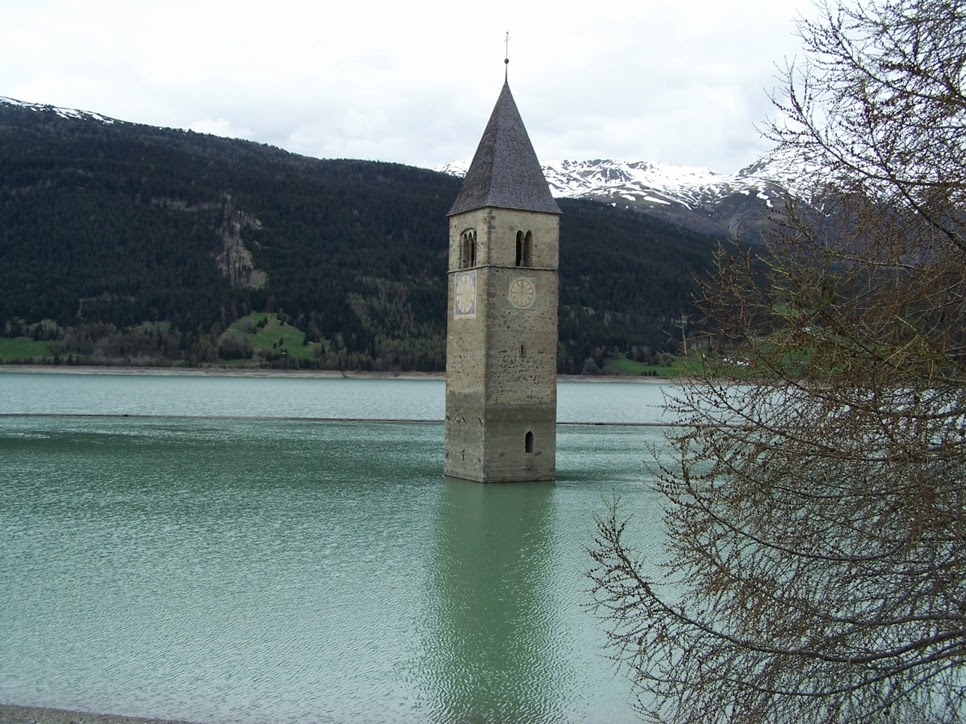 We arrived at our destination in the small village of St. Michael-Eppan and rented a small apartment for a few days. At first I thought it was strange to hear the shop owners speaking in German. (Lucky for me I had a personal translator J ) 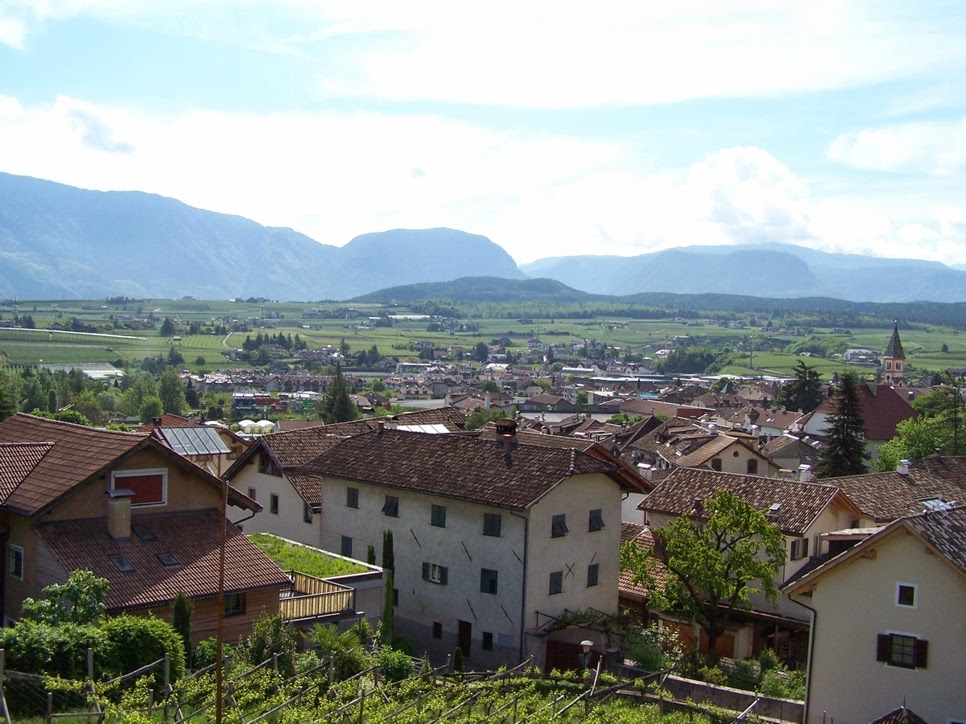 This area is a popular destination for Germans in the fall to come for the Toergelen (when the new wine is almost ready and farmers in the region open their wine cellars to the public to drink the old wine and make room for the new) It also makes for a great weekend getaway because of it’s close proximity to Germany. (not to mention seems like everyone here speaks German J ). 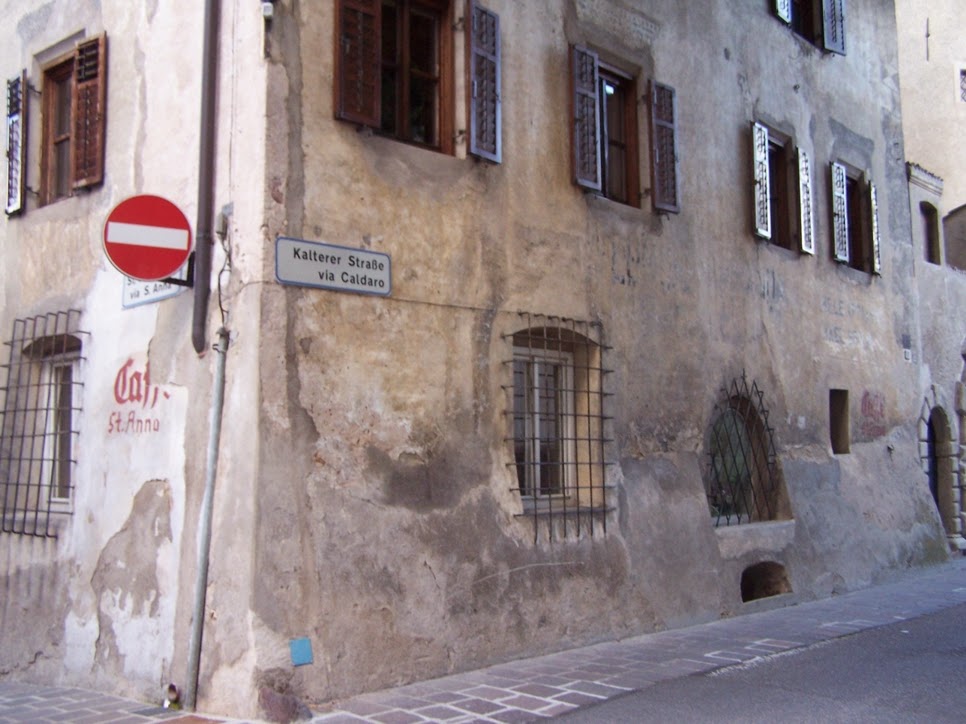 The region can be traced back to 15 BC, when Romans conquered the area. I could feel the resonating history beneath my feet as we explored the village along the narrow cobblestone streets. Walking through parts of St. Michael-Eppan was like taking a step back in time amongst the historic stone buildings. The quaint village proudly mixed new with old while simultaneously retaining its heritage.

The further we ventured into the village I just started snapping one photo after the other of interesting doors that caught my eye. It became an obsession that gained in momentum after each click of the button. Something drew me into the elaborate designs and the unassuming simplicity of others while the cool hard surface of stonework contrasted against its frame. 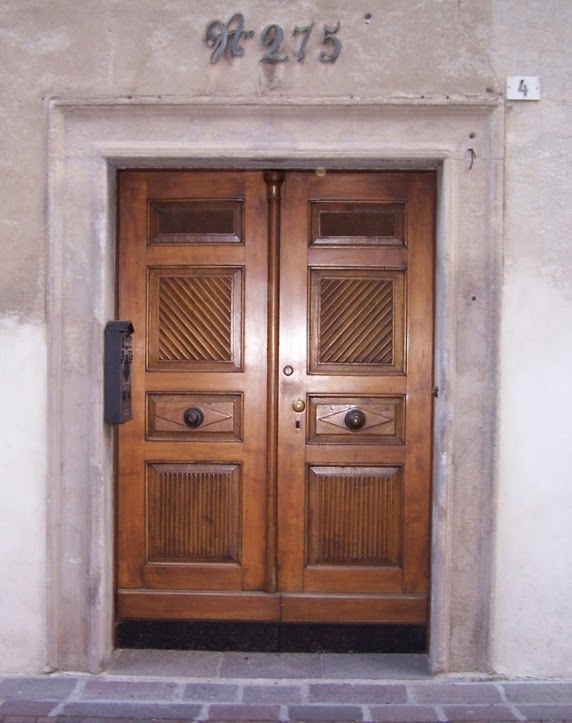 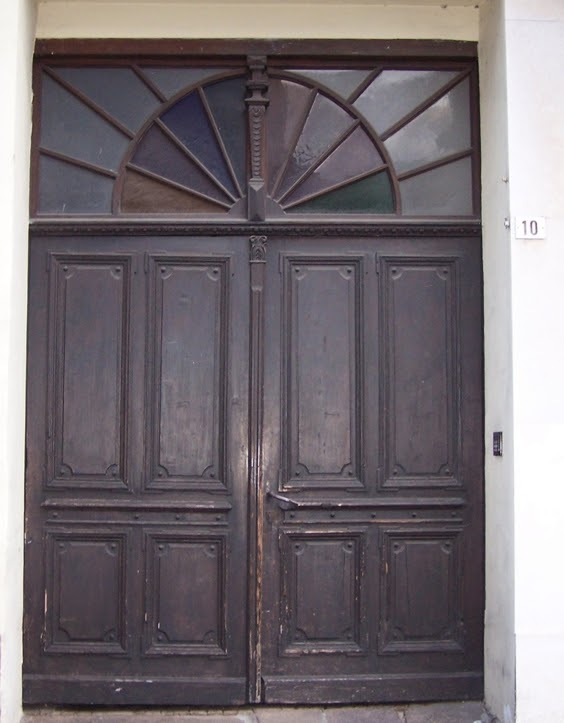 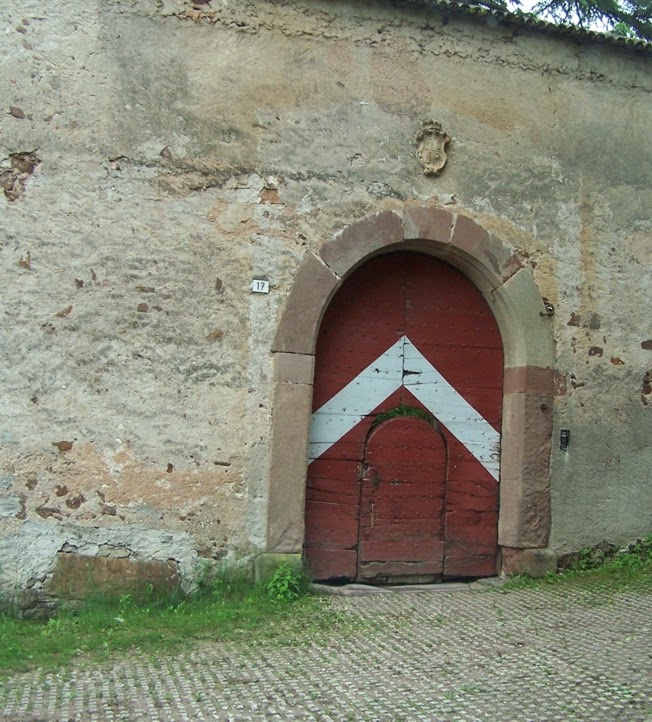 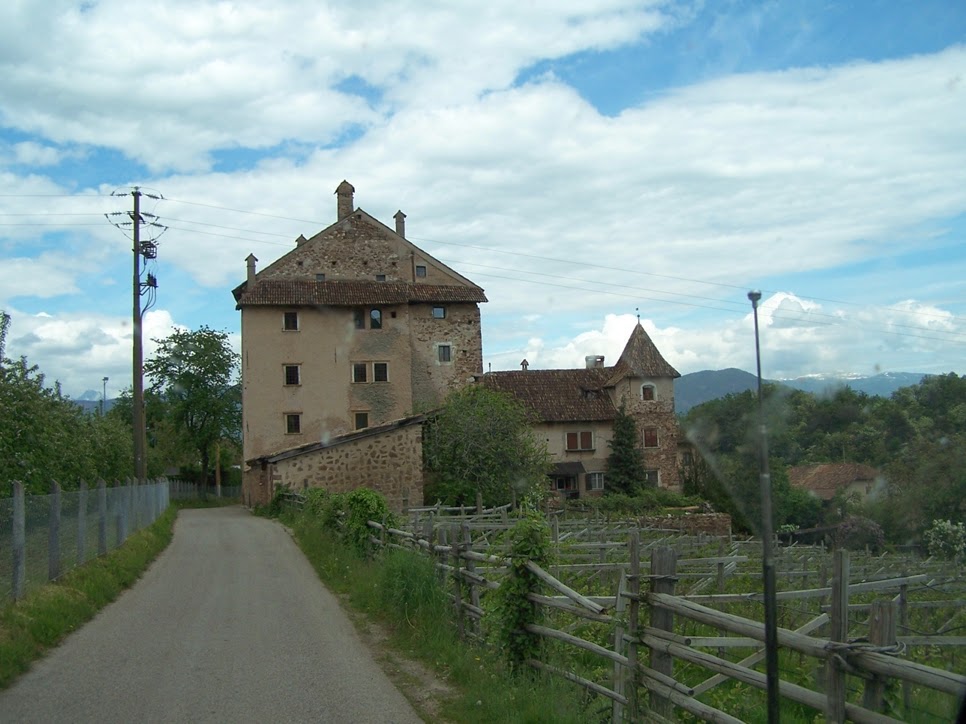 We toured the Schloss Moos, (Castle Moos) a museum in St. Michael-Eppan that dates back to medieval times.  We happened to be the only ones on the tour, we felt like VIP’s having the guide all to ourselves. We even got to go into the sections that had been roped off (shhh, don’t tell J ). She spoke in German, (which of course was no problem for my ‘honey’) but she also made an effort to speak some English.
She said that they rarely had English Speaking visitors and was happy to practice her English on me. (However, she turned to my ‘honey’ when she got stuck on a word –lol)

Entrance to the castle

The most spectacular views I experienced is when we hiked to the Eislöcher  (ice holes) It was quite a warm day and we were in T-shirts as we hiked along the winding path while the carpet of leaves crunched beneath our feet. The closer we got to the natural phenomenon  we felt the temperature drop as goose bumps formed on my exposed arms. (maybe I should of brought a sweater) As we neared the Mendola mountain ridge there was no mistaking the 10-degree difference in the surrounding air. This happens when the cold air from Mount Ganda is brought to the surface by warmer outside temperatures and freezes into ice crystals. The pure natural beauty of the area is just breathtaking!
(Strange, never found a door J ) 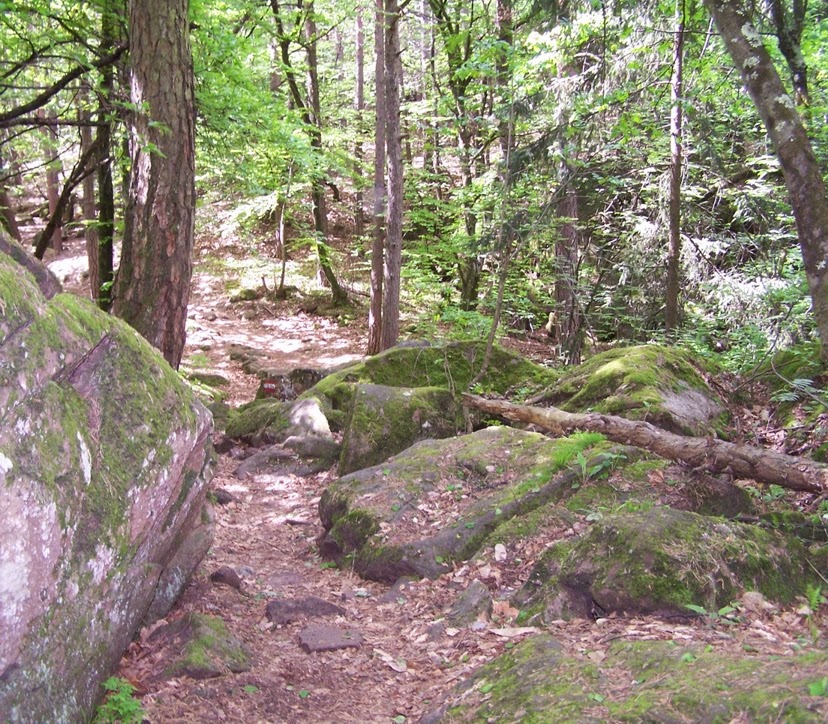 It was well worth navigating over the rugged terrain. 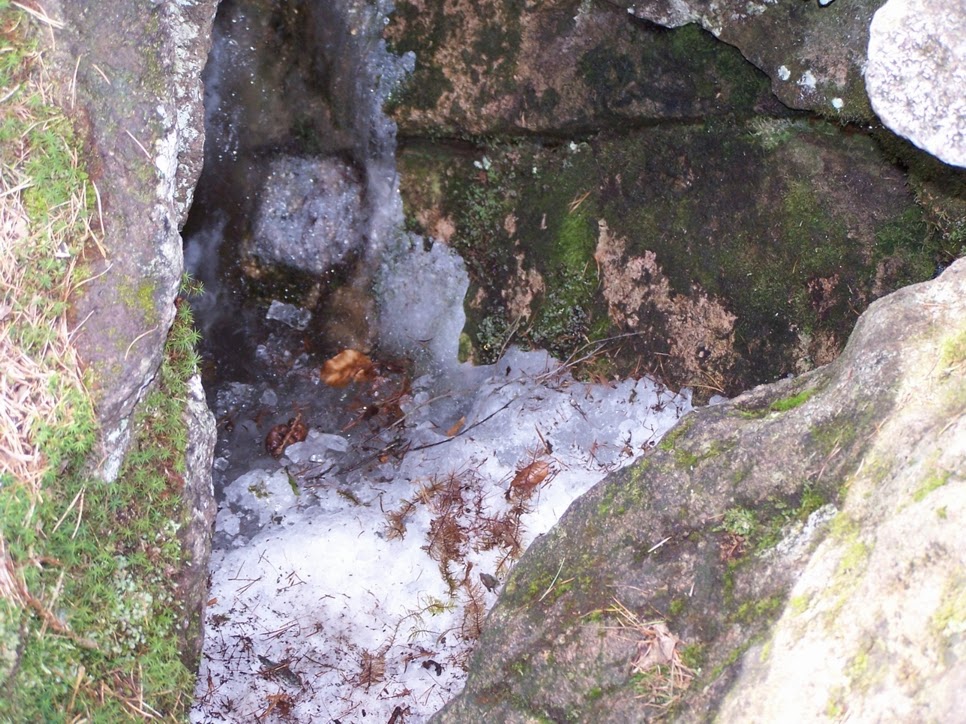 Ice forms in the crevices of rock. 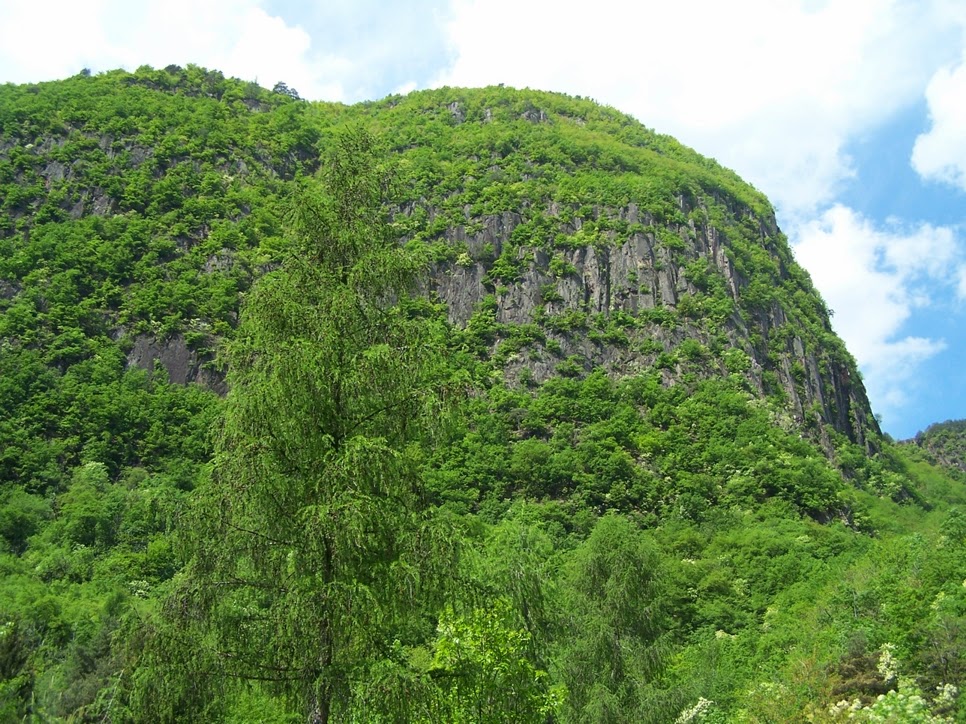 I was at 500 meters above sea level when I took this spectacular picture! 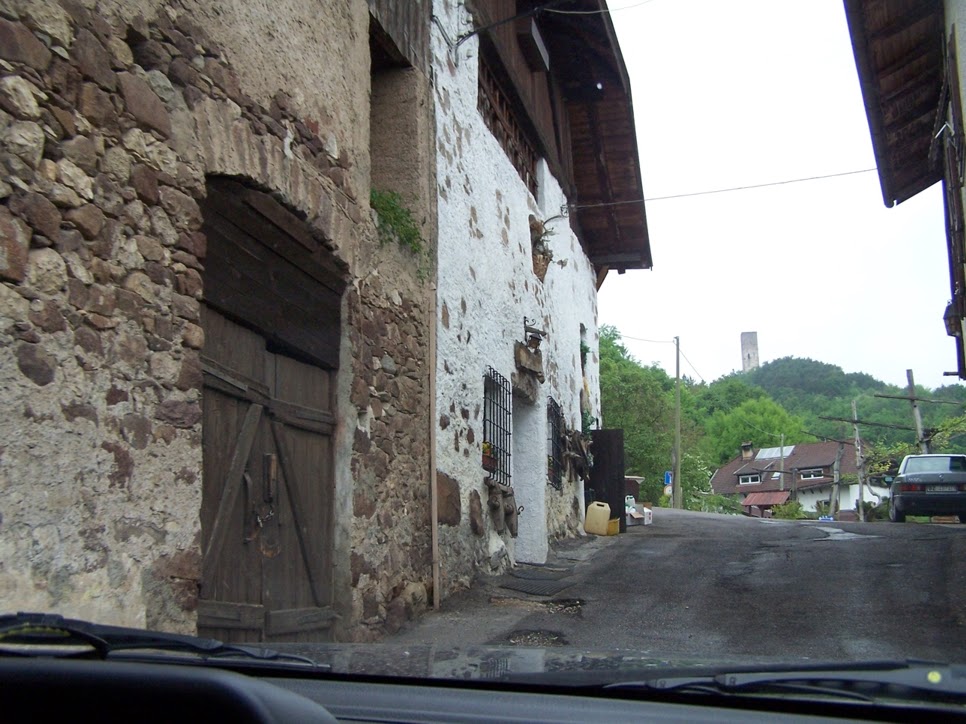 The rain did not dampen our spirit to explore the countryside and the next day we made a tour with the car around the area to the nearby village of Missian/Missiano.  The small serene village of 240 people is most famous for the Three Castles Walk (Dreiburgenwanderung) - Castel d’Appiano, Castel Boymont and Castel Corba. I regret that we never went on the hike to see the castles. The rain just would not co-operate with us and the 2-hour hike along the path would have been too treacherous to attempt.

This house was built across the roadway Which was first, the road or the house - lol

As close as I could get of two of the castles on this misty and very soggy day. 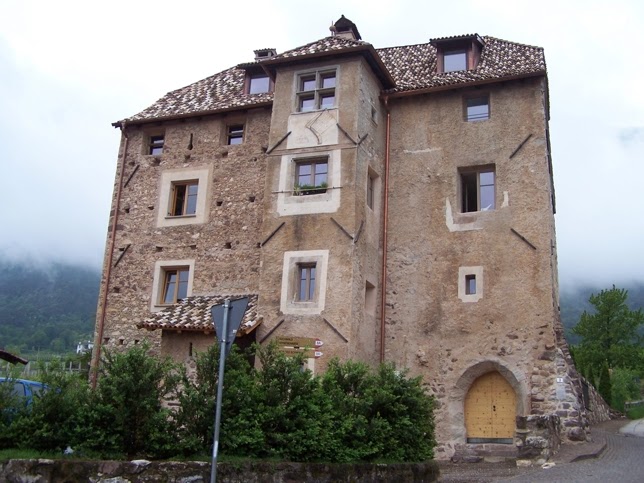 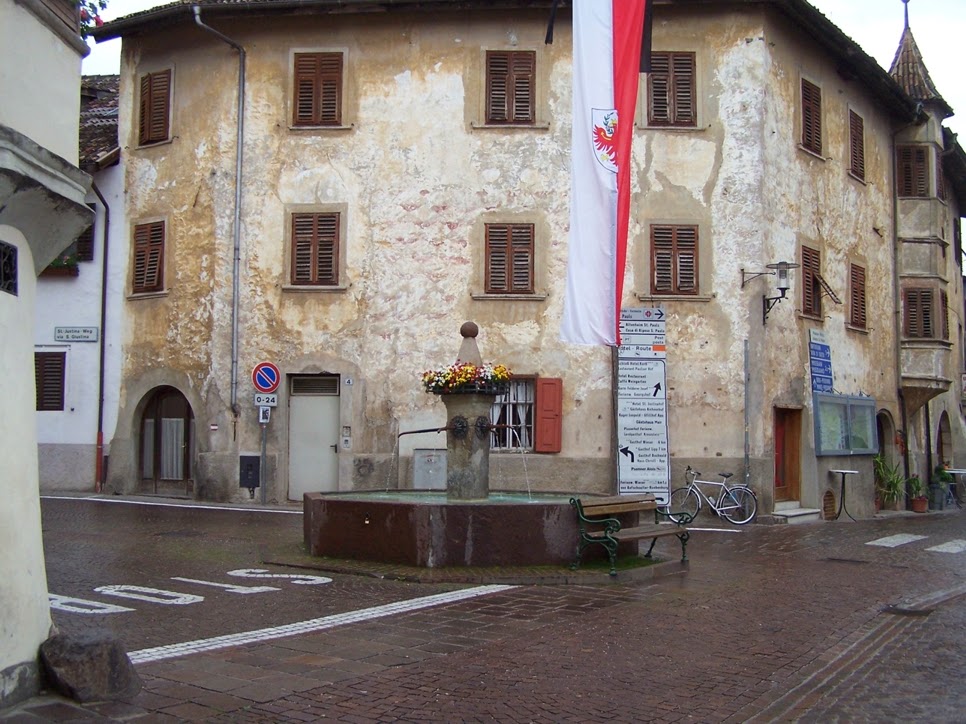 Next it was over to historical town of St. Pauls  where wine has been the prosperity of this community since the Middle ages.
Nestled in the center of town stands the monumental church of Pauli Bekehrung - Cathedral in the Country. One of the oldest churches on record dating back to the 15th century when noble families and wealthy farmers had it constructed to demonstrate their wealth and power.


The narrow streets made maneuvering through them in a car quite the challenge. - I graciously edited out a lot of the door pictures I took, didn’t want to look too obsessed J

Pauli Bekehrung – Cathedral in the Country (above) 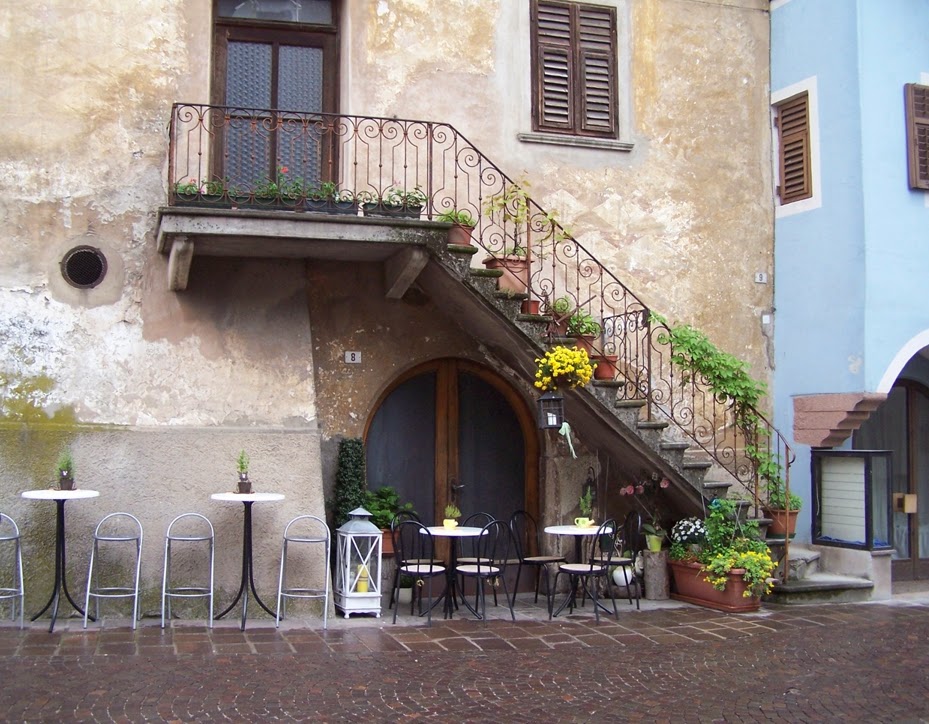 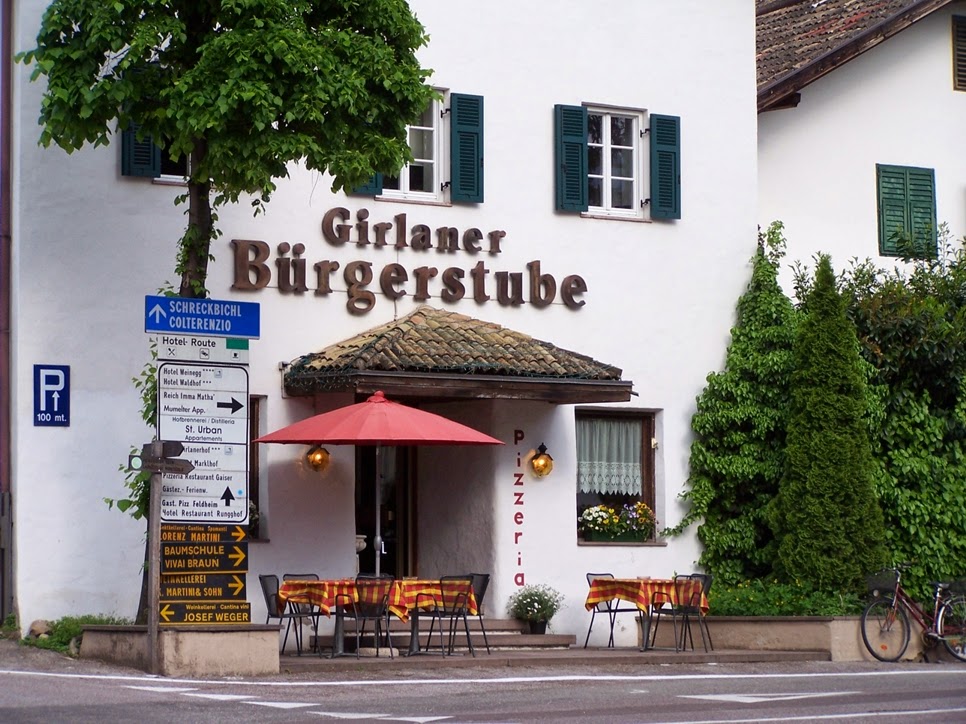 We headed over to Girlan to see if an old friend of my ‘honeys’  still owned a local restaurant. We were curious if he was still around,  it had been 20 years since he last seen him.

As we walked into the restaurant
unannounced we were greeted with open arms from the owner - his old friend. Old times were shared over a drink and soon it was time to say our goodbyes. 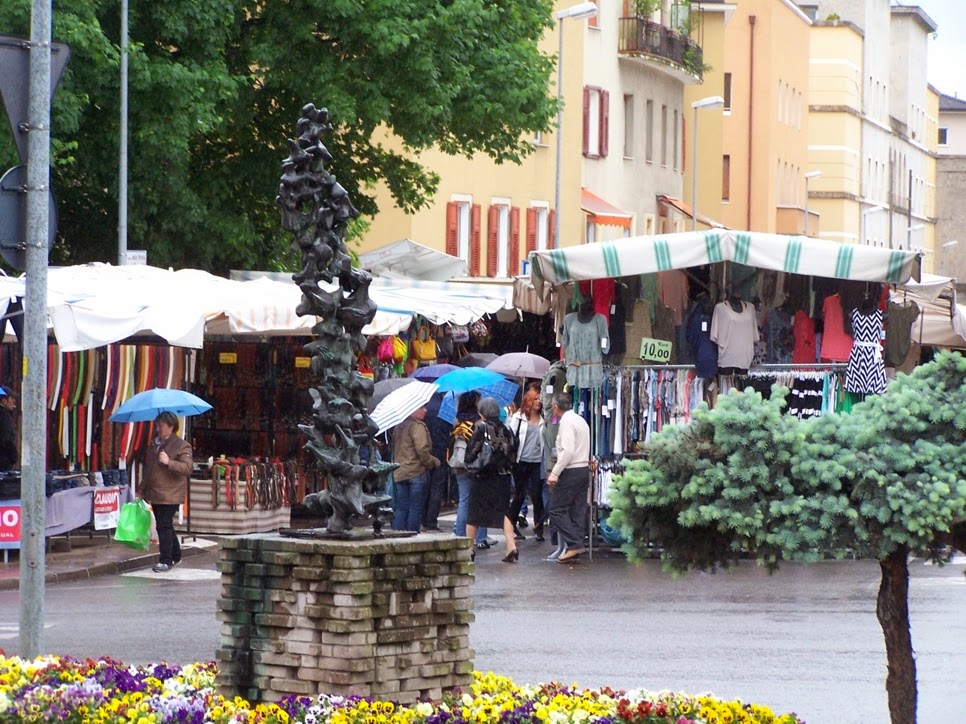 Next we ventured into the city of Bolzano (Bolzano is the provincial capital of South Tyrol and largest city) for the Saturday Market offering a variety of wares from trinkets and clothes to authentic smoked meats and cheeses. Grabbing our umbrella we shuffled into the throng of shoppers. The rain didn’t dilute anyone’s enthusiasm to browse the vendors who proudly displayed their wares. Before leaving Bolzano we stopped at the town square. What outing would be complete without a stop for a glass of wine in the plaza! (How European of us J) The little bird graciously shared the table with us at the outdoor café.

The best pizza I ever ate was at a restaurant just up the street from where we were staying (the name escapes me at the moment) – the crust was super thin, kissed with a light tomato sauce, fresh mozzarella with delicate strips of Prosciutto that were simply divine. My kind of pizza, because that is all that was on it! (some call me a fussy eater)

I could not figure out one thing, of all the places I thought I would find spaghetti on the menu would be in Italy, to my surprise the closest I got was noodles in a cheese sauce. (Strange but true)


Our favourite place to eat was at the Heuschupfn Kellerbar Restaurant, it had a charming courtyard and excellent Schnitzel!


I only wish we had a longer time to spend taking in more of Italy. In that short time I fell in love with it's beating pulse. So as we headed toward Germany (where even more doors awaited for my camera) I hoped that I would get the chance to return one day. (Preferably on a motorcycle J)

The picture to the left is of the Nuertinger Keller it was converted into a restaurant from an old ice cellar that a local brewery used. 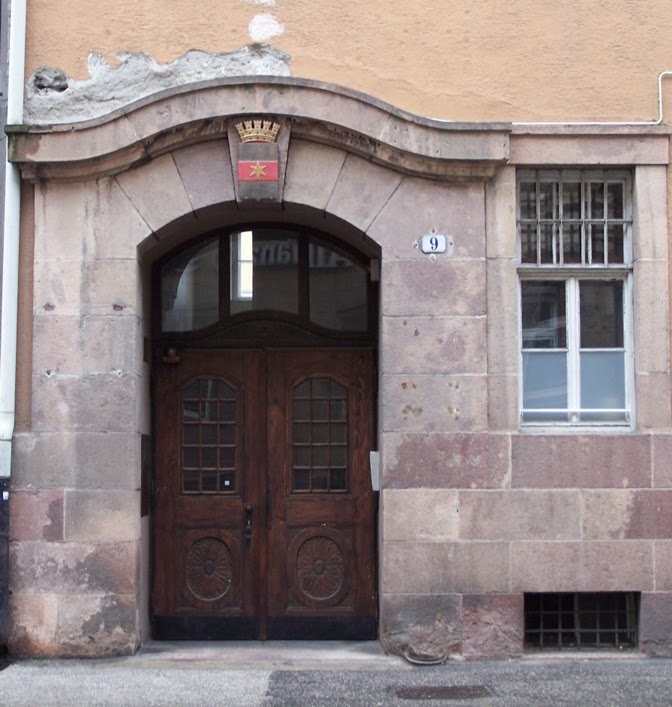 I honestly never thought much about the ‘door’ other than to use it for the purpose it was constructed for. (I never was attracted to any in Canada) I would have never imagined I would end up with an obsession to constantly take pictures of them either.  When I returned home to Canada to show my photo album of my amazing trip to my family they all thought I was a little ‘off my rocker’ when it mostly contained images of doors (and some windows thrown in for good measure). 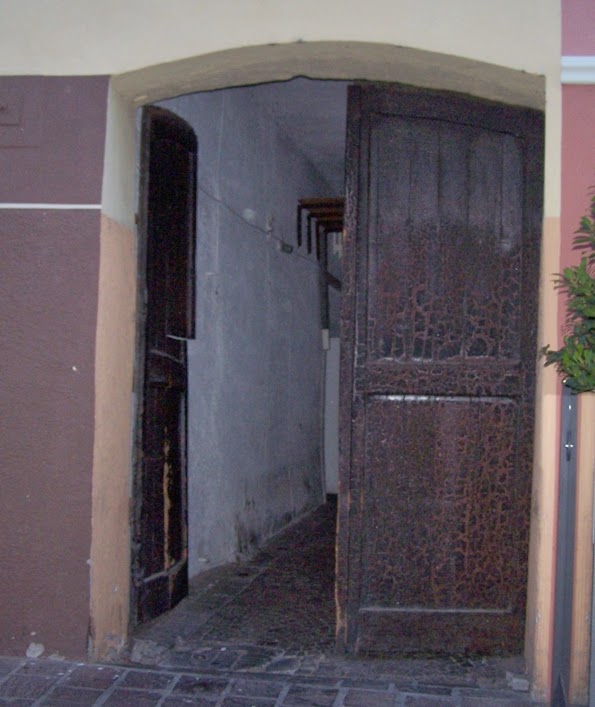 It was not until I started to review and ponder over the pictures myself that I realized why I was so mesmerized by a ‘door’. Part of it was the designer in me and I was fascinated by some of the doors amazing workmanship and I admired the carpenter who used his craft to produce a work of art rather than just a useful barrier to keep out the cold, among other things. I was lured by the mystery that could be hiding behind the door, by the story that could be told by opening the door.

Do you realize how often we refer to the ‘door’ in what we do or to describe a situation that we have gotten into? Opportunity can knock at your door; or you choose to open a door to a new career; we close the door to shut people out; or hide our deep secrets behind closed doors. (So maybe I am right where I should be in my ‘rocker’ –wink) Curious, I found out that the door dated back to 3, 700 BC! Recently, Archaeologists in Zurich unearthed a door from 5,000 years ago.

So I think I will be proud of my obsession for the ‘door’. 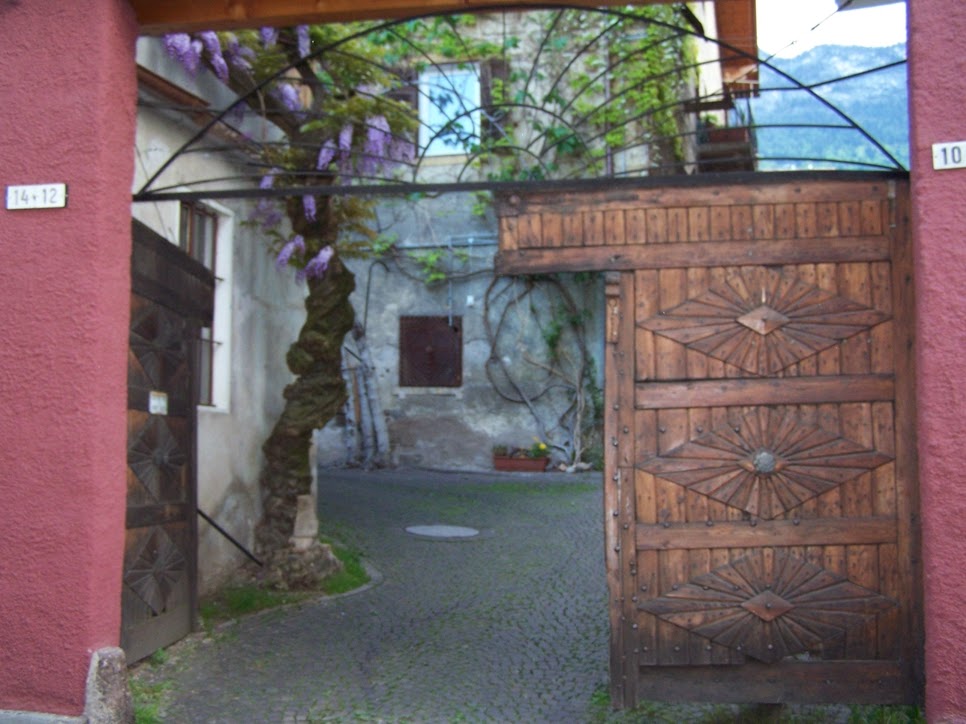 Who knows what stories can be spun when I open the next door…
Posted by the Frozen Canuck at 12:38 PM 34 comments: