Do Resolutions ever turn out, maybe

So far 2019 has started off as a slow riding season for me. My New Year’s Resolution to ride more isn’t going exactly as planned. I have been in Florida since December 27th and believe it or not I have only been on ONE ride! It certainly wasn’t from lack of trying.

We had company as soon as we got to Florida just after Christmas. Our friend and his wife from Germany stayed with us for the first fourteen days. At least they rented a motorcycle on Sunday Jan 6th  so that we could get in some riding.

I highly recommend Haus of Trikes in Fort Myers. (Our friends rented a Harley for the day and it was much cheaper than anywhere else). When they brought the bike back, I was browsing around the store when I came across a leather vest. Wow, super soft leather and it was $79.99. I even picked up a sweet leather pouch for $20 (I had recently purchased a material Harley vest for the same price, ya always pay for the name) Suffice to say, my shopping spree is maxed out for the season now.

Anyway, we had a wonderful ride down to Goodland Florida. 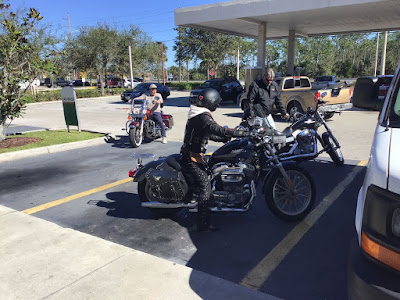 Gassing up for the ride, the morning started off chilly but warmed up nicely.
(At least I thought it was chilly – note the additional hoodie under my jacket)

We stopped at Gator’s Crossroads Bar & Grill. They had a live band playing outside. We stayed for a drink, and listened to a few sets. Don’t worry, I don’t drink alcohol and ride, but when I get home I certainly indulge in a glass of wine or two or three…

I don’t know what the name of the band was, but they were good. Our friends were enjoying the place too.

Then we made our way to Stan’s Idle Hour. That is one hoping place with live music and it seems to always be packed when we go there. They always give bikers the best spots to park too (and bike parking is free). We even managed to find a table to sit at and enjoyed an afternoon of music and good times.

The guys goofing around at Stan’s Idle Hour

We made it back home just as the sun was setting, I was glad, my night vision isn’t as good as it used to be. 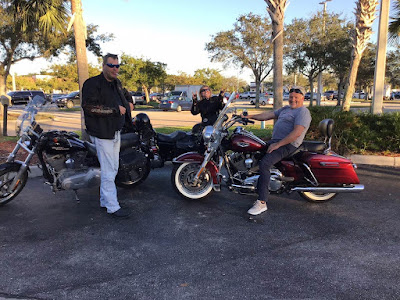 I had the biggest smile on my face that day, even our friends said that was the first time they seen me smile so much the entire week.
The saying is true, “I am a just happier person when I ride”.

Our friends left to go back to Germany on Jan 9th.  It was awesome to have them here but having the house to ourselves again… do I really need to say more.

The first few weeks after getting here the weather had been into the mid 80’s (26+C), but now we keep getting cold fronts and it is barley getting to 70 (21C) by late afternoon. The nights are really cold too, most hovering around the 40s (about 6-10C). It just has been a weather rollercoaster lately. I know, I shouldn’t complain, but I will anyway. I have to admit, it is still way better than the negative digits and mounds of snow back home. Even with the cooler temperatures we still could have gotten out on the bikes, but then my BF got sick with one of those “man colds”. I just don’t have the heart to take off on my motorcycle without him, at least not yet. Today is Saturday Jan 19 and it is going to be the nicest day before the weather turns to crap again. It is predicted to be that way into the middle of next week. The BF is still not well and with my luck by the time he feels better I will probably catch whatever the hell he has. Although I have it on good authority that the “female cold” is not as severe.

And yet I am optimistic, it is still early in the new year, so maybe I will be able to stick to my resolution after all. At least I sure will make that extra effort to.

This was the route we took to get there. Went through Immokalee, along Corkscrew to Collier Rd, then onto 41. It is a fairly nice ride, although it can get busy on Collier through Naples.

Cruising through Life & Enjoying the Ride...
Posted by the Frozen Canuck at 9:59 AM No comments: