Ave Maria… a little town in the middle of nowhere 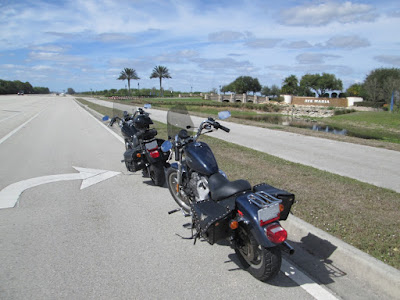 At first glance the sign that proclaims Ave Maria looks like all the other gated communities that boast 'resort style' living in Florida. 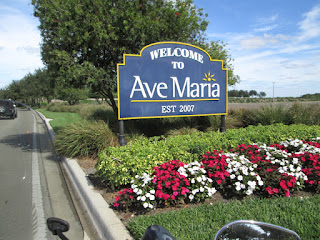 Most gated communities around here usually have tropical names like Pelican Preserve, Gulf Harbour and Majestic Palms so when I had seen ‘Ave Maria’ (Which is a Catholic prayer to the Virgin Mary – Hail Mary) It sparked my curiosity and warranted further investigation.

After a little digging, it became apparent that this place wasn’t at all like the other gated housing developments that hide behind lush landscaping throughout Florida.

It was in fact a bonafide fully functioning town established in 2007. The town sprung up basically in the middle of nowhere between Immokalee and Naples. Its entire concept is based around it being a Catholic University Town and was the vision of the devout orthodox Catholic Tom Monaghan who is the founder of Domino’s pizza. 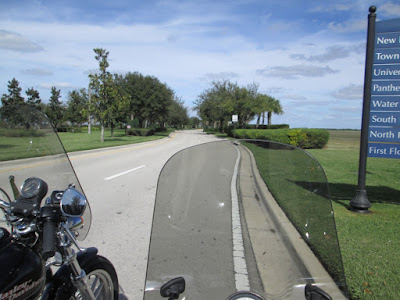 Upon entering, the streets are immaculate, flowers in bloom and perfectly manicured grass flows alongside the road. Not one leaf is out of place. We even passed a crew pressure washing the sidewalk. 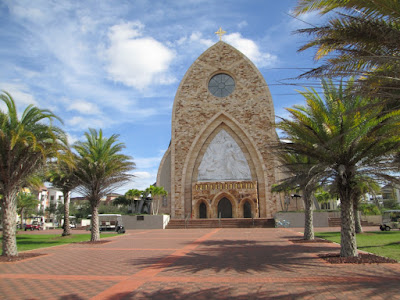 We made our way to the Town Center where all the shops and businesses are situated around the main focal point, the Catholic Oratory (private chapel owned by the Towns Catholic University).

The front of the Oratory is reminiscent of a monolith with a 30-foot sculpture depicting the Archangel Gabriel greeting the Virgin Mary created by Marton Varo.


[Fun Fact: 54 tons of Carrara marble was extracted from the same quarry used by Michelangelo to construct the sculpture. The sculpture was unveiled at the Oratory on March 25, 2011. – On Jan 19, 2017 Ave Maria University sold the Oratory to the Diocese of Venice making the transition from a ‘quasi parish’ to regular parish.] 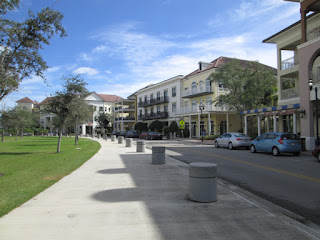 The shops and professional businesses were of what you expected in a small town, from a lawyer to a bank, a clothing store, a little coffee shop with a sidewalk patio, along with a local ‘watering hole’ called The Pub, (What else would it be called) and of course a religious gift shop. 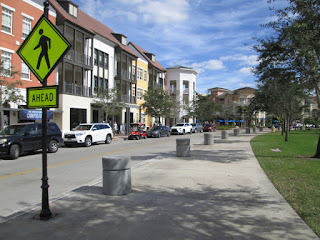 It had the feel of a small village that I had visited when we had gone to Italy, which obviously was the way Tom Monaghan had intended.

The big difference was that there was very little traffic or people for that matter. I certainly wasn’t complaining. 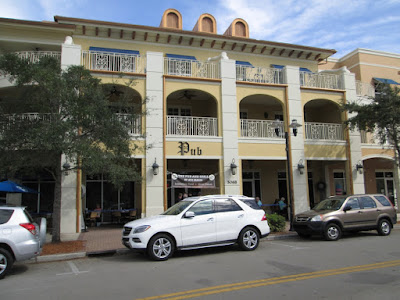 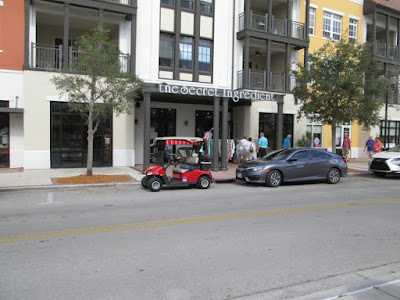 The 4,000-acre town is Golf cart friendly which also just happens to be a popular mode of transportation for the community inhabitants.  (Golf cart garages are even an option for a new home here)

I found it to be a surreal little town making me feel strangely peaceful yet leaving me with an unsettling under current as we sauntered around the town centers quaint streets. As we wandered along the ‘Stepford Wives’ flashed across my mind. (A horror thriller movie about an idyllic town where the women have been turned into obedient robot housewives). Maybe I just watch too many horror flicks…

But seriously, walking around this town truly felt like I was walking around on a movie set, it was so picture perfect it just felt like a fictional town. Don’t get me wrong, I could see the real sense of community pride and the few people that we did come across were very polite and genuinely happy to see us. A family pulled up in a golf cart as we were about to get on our bikes to explore more of the town. The woman struck up a friendly conversation about motorcycling with us while she waited for her children who had gone into a store to get back.

We continued on our bikes exploring some of the neighbourhoods . All of which have a specific designation, from family friendly to 55+ and even one for the more affluent offering luxury estate homes. Each section offering its own unique form of recreation within the neighbourhood from private golf courses to nature trails. However, most of the development is still heavily under construction and the town is only at 10% of its capacity. (That explains the lack of people)

We then drove over to the far end of the town where the recreation facilities, North Park and the Water Park is located. This area is for the exclusive use of the residents of Ave Marie. However, there is no restrictions on driving around to have a look.


A sign caught my eye on the way to check out the Water Park,
and then I noticed something in the background…

FYI, this is NOT the water park


A Bit Of Ave Maria History
A ‘Gated community’ that becomes a complete town ….

After a decade since its inception this small town is still not without its controversy. Ave Maria is actually a planned community based on strict Catholic ideologies. It is owned and governed by Tom Monaghan in partnership with the developer, Barron Collier Company.

When Tom Monaghan first announced his plans for the town he expressed that there would be a complete ‘ban on contraception and pornography’. He later rescinded that comment when construction got underway. To this day, some still consider the town a “religious-centric” community and “unconstitutional”.  According to the town it welcomes everyone regardless of religious denomination.

My personal thoughts after reading the opinions and stories that surround this little community and actually visiting it,  I just think that it comes down to people wanting to live within a safe community. This one just happens to have a strong Catholic presence and for some they actually like a more controlled environment in which to live.  - After all no one is forced to live there or are they…. 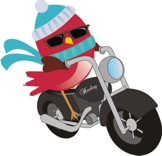 Cruising Through Life & Enjoying The Ride...
Posted by the Frozen Canuck at 4:33 AM