Random Thoughts On A Solo Ride 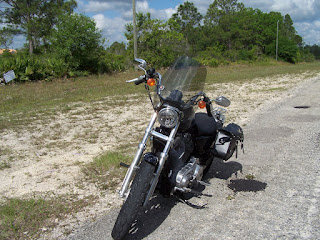 I did IT and IT was Amazing!

What was so amazing? Finally getting out on my bike for a solo ride. My first solo in Florida to be exact. Even though it wasn’t an epic ride, it was more of a notable turning point of sorts for me.

A journey that I believe is the next step to my riding independence, while at the same time trying to discover who I am and what direction I want to go in the next phase of my life. 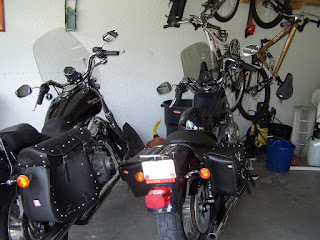 But first things first, I had to get my bike out of the garage. Okay, that might of been a bit dramatic. Actually, it didn’t really present that big of a problem after all. Just the minor act of moving the car and leaving it parked at the end of the driveway allowed for plenty of room to back out my bike without fear of smashing into it. With that accomplished I suited up and headed out.

I had just pulled out onto the road when my gas light came on, so it was obvious that my first stop would need to be at the gas station. As I made my way through the neighbourhood a wide grin spread across my face. It must of had an infectious effect on a few people that I saw as they each gave a big wave and had a smile as big as mine as I passed by.

As I pulled in at the gas station every pump was occupied leaving me to wait for my turn behind an SUV. A few minutes went by and finally the guy whose truck it was came back to start pumping gas. (Gas stations work different here; when paying in cash, you pay first inside then fill up - unlike the trusting Canadians). Anyway he starts pumping his gas and gives me the thumbs up and says “Nice bike, is that an 883?” I nod my head and speaking loudly over the thrum of my engine say “yes”. He continues with “What a great day for a ride, hope to get out soon myself” He finishes up and gives me a big wave as he pulls away.

“Bikers are naturally friendly folks, even when on four wheels”

I really had no destination in mind that day, rather a direction towards those rare twisty roads that are so illusive around here. I meandered down a few side streets letting my memory serve as my road map until I came upon my target called Buckingham Road. A rare find indeed, with its swooping curves that lazily weave their way around a mix of cattle and horse ranches. Peaceful, serene, a place to loose ones self.

Even though I must of been on this same road a hundred times before with my BF over the years,  this time it was completely different. My bike was my guide and my desires were my direction.

Now that I am officially in the “middle aged” bracket I asked myself... “What the hell do I really want to do now with my life?” A glimmer of a thought started to form, then silence was the reply. 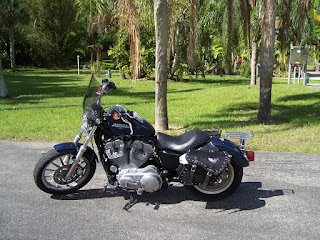 Eventually I came to The Hut restaurant and pulled in for a break. It wasn’t open yet and I had my choice of spots so I settled off to the side near a group of trees and drank some ice water from my cooler pack.

Being here I recalled the time a couple of friends had went on a ride with us around Lake Okeechobee and stopped in here for a drink (non alcoholic of course) It was a good day.

After my brief rest I decided to head back the way I came in order to get to another curvy road called Treeline Ave. Besides it gave me a chance to ride those curves once again. (A do-over in biker lingo) My only goal was to miss as many traffic clogged roads as possible. Along the way I missed a street I should of turned down, but soon another came along and I discovered a new road to head down. My timing was perfect to be out when I was. I managed to hit long stretches of next to no traffic giving me time to let my thoughts wander as my tension blew away in the wind.

“I am doing this, me alone, and it feels great!”

Making the turn onto Treeline Ave I was yet again travelling along a mostly deserted road. Fortresses of gated communities sprawled out along this section with their perfectly manicured lawns and private golf clubs hidden behind walls of trees. 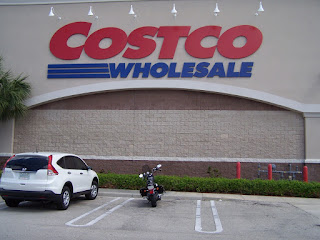 After crossing over Alico Road I realized how close I was to Costco and decided to make my way into the parking lot. It occurred to me as to be there I might as well grab a ‘bottle’ for my reward for when I got back home. *smile* 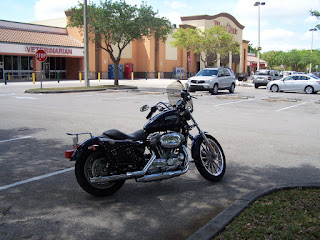 I decided to brave a little more traffic and head back along the main routes and make a cut through town just because.

I made one last stop at the WinnDixie to get a bag of chips to satisfy my munchie craving and crammed them into my saddle bag on top of my bottle.

I ended up having to remove my backpack and wear it to make room for those all important chips.  Missing a few more streets (on purpose) that I could of turned down to get home, I eventually made it back in a round about way.

I realized that I can test my limits and not fear where it will take me. It allowed me to rejuvenate my soul and bring me one step closer to understanding just where and what I want to do with the remainder of my life. And of course with my spirit free to roam it cleansed my senses. Liberation is a wonderful thing. Now I can’t wait to do it again and again.

“Random silly thoughts, hard serious questions...but in the end, isn’t it really just about the ride - maybe I just need a longer one”

Partial Route of my tour - Buckingham / Treeline Buckingham is a fairly long road and there is much more to it than the brief section I travelled on.

Posted by the Frozen Canuck at 3:15 PM