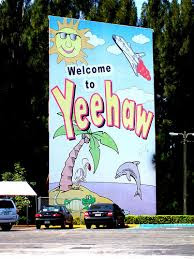 My reason to visit ‘Yeehaw Junction’ was to explore more of the history surrounding one of "Old Florida's" rural areas. Who am I kidding, it was just because of the funny name.

Anyway, I also really wanted a full day trip, one of those “oohhh my body aches, but what a ride” type of cruise. 235 miles (378 km) later I had gotten what I asked for.

(FYI: If we had come in from the other way we might have seen a town sign, but we didn’t so I had to rummage through the Internet to find one.  The Yeehaw Junction Welcome Sign –Photo by Jim )

Our road trip started like so many of ours do when we venture north, using the starting point in Alva and heading out along North River Road we connected onto FL-29. From 29 through 27 it is mostly Orange groves between flat open fields. (Note to self: check wind velocity before leaving) Eventually all that gave way to the open range of Cattle Ranches along FL-70 with the air getting a little ‘ripe’ in spots. 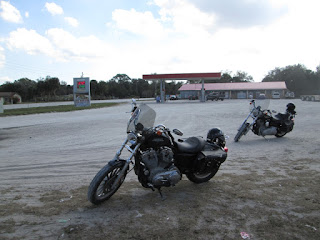 Shortly after passing the Cracker Trail Country Store, (which by the way, had gas pumps) my gas light came on. Really, it couldn’t have warned me before.

I was resolved to cross my fingers and hope that another gas station would appear on the horizon. A good lesson to learn, it is always a good idea that when riding a back country road, don’t pass up a gas station. You never know when you will find another.

As I was running on fumes it would be 22.4 miles (36 km) later until we would finally come across a Sunoco Gas Station on US 441. Totally relieved that I made it we filled up and took a few minutes to stretch. Little did we know that it would only be a short ride, 13 miles (21 km) before we pulled into the Desert Inn Bar & Restaurant. 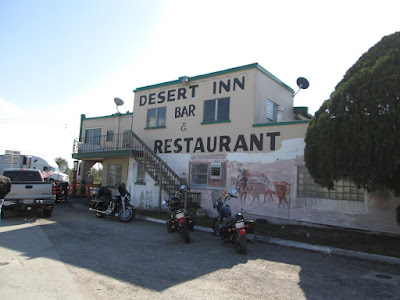 The Desert Inn dates back to the 1880’s when it was established as a trading post along a four-corner trail system used by the areas cowboys and loggers. The Desert Inn serviced the locals in more ways than one as it also doubled as a brothel.

Eventually actual roads made their way to the Desert Inn in the early 1930’s, and the area became known as “Jackass Crossing” or “Jackass Junction” in honor of the ranchers and lumbermen who relied on mules to work the cattle or haul lumber. It wasn’t until the 1950’s when the Florida Turnpike passed through that the state legislators felt that the name was a little too risqué for the influx of winter tourists and changed the name to ‘Yeehaw Junction’ which also tied it into the nearby railroad depot. 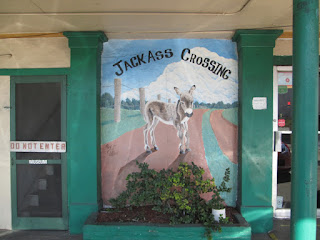 There are several versions of how the origin of the name ‘Yeehaw’ came to be. One suggests that it was named for the Seminole language word meaning "wolf".

But I am more inclined to believe the version that suggests that “yeehaw” is similar to the noise a mule makes. It even ties in nicely to the original name from when the area was referred to as ‘Jackass Crossing’. See,even the Desert Inn agrees. 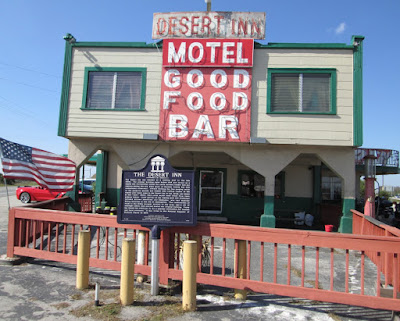 A plaque stands proudly in the front of the weather-beaten building proclaiming a bit of its history (Funny there was no mention of it having being a bordello on the sign) and in 1994 was registered in the National Register of Historic Places.

Exploring the grounds
We had no intention of eating there, so we didn’t venture inside for a photo op. I imagine it would have been interesting judging by the exterior – “C'est la vie” (That's life), opportunity missed. 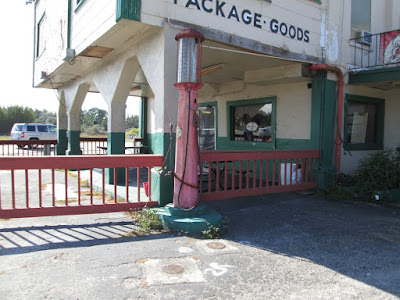 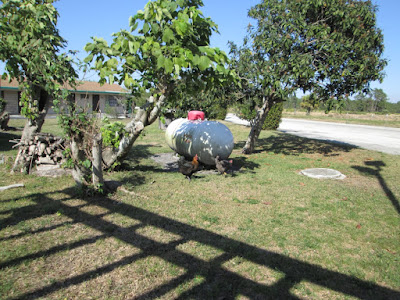 Met a few chickens wandering the grounds out back.

-Fresh eggs or chicken for the restaurant? 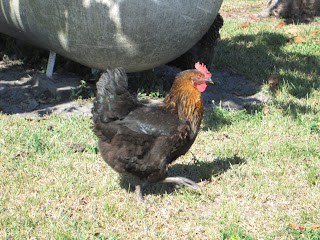 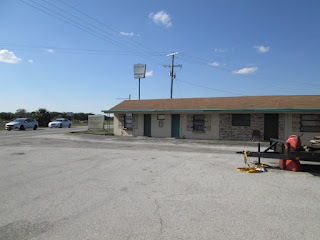 The motel out back has recently (how recent I can’t say) undergone an exterior face lift by adding a painted log wood façade.

Not sure how the inside of the rooms look.  (I got the feeling that it is more likely used as an “hourly” stop over – remnants of the ‘good ol’ days’ perhaps).

But their website does proclaim to have clean rooms  and it is good to know that it always “passes the health inspection”. 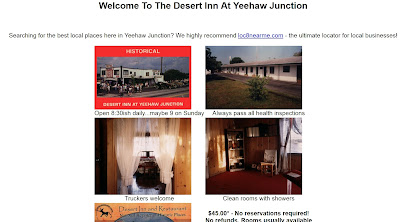 Well in that case, who wouldn’t want to vacation on a busy road smack dab in cattle country… 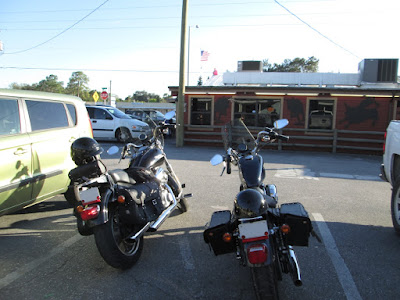 On the way back we varied our route to take us through Okeechobee and then on into LaBelle.

The wind had really started to pick up and extreme gusts pummeled at me making for a very hard ride back through the vast openness of the countryside. (I just held on real tight). 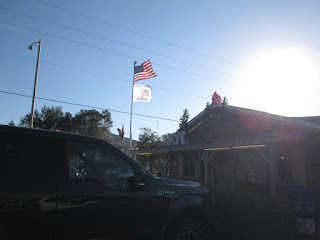 We stopped for supper at The Log Cabin in LaBelle on FL-80.  We got there shortly before 5pm and already the place was filling up fast.  As its name would suggest, it looks exactly like a log cabin on the inside, with rows of picnic tables and rustic decor. However, they seem to be a little slow on taking the Christmas decorations down. Even the inside was decked out in Christmas garland.

The restaurant offered a nice selection of smoked BBQ fare. The prices were reasonable and I was amazed when they offered a free cup of soup for a starter and free ice cream for desert. How often does that happen now a days? (For the record, I declined both)

Posted by the Frozen Canuck at 4:56 AM