- The Trip
This year we decided that we would like to spend Christmas in Florida, so we are packing up early and heading south. Also going to stay longer this year. (wonder if there will still be snow when we get back this time…)

Early December we packed up Fred and Screech, the bikes and headed south. Ok, got a little ahead of myself, the truck needed to be serviced, and wouldn’t you know it, the part they needed had not come in yet, so we had to wait. We got a late start and didn’t leave until after 2 pm that day, but at least we got to head out, and we managed not to hit a snowstorm either!! Because of the late start we took three days to get down, better late than never  J

- The Christmas Experience
Wow, spending Christmas in Florida for the first time was great! A little weird though, and that was only because I have only ever seen mountains of snow around this time of year. I have to admit, having a nice ice cold drink in my hand, and lounging  by the pool sure beats huddled around the fireplace trying to keep warm while the wind whips over the yard in a frenzy and the falling snow forms a curtain so thick that you can not see across the street… yes, I was a little sad that this was the first time I was not spending Christmas with my parents but after speaking on the phone with them and hearing that it was –30 C I got over it J  (Sorry Mom)

Also strange was to see the yards decked out in all their Christmas glory and not a spec of snow (good thing, because if we ever see the white stuff here it is time to move) The prettiest thing that I liked most was seeing the tall palm trees lit up in lights. I brought down a few decorations, and a mini Christmas tree, just so I would remember that it was actually Christmas.

New Years Eve was kind of neat too, can’t say that I ever stood outside and watched fireworks from my front yard back home. – In the week before New Years, on almost every street corner you can buy fireworks (strange in a place where everything gets so dry and the empty lots are just a fire waiting to happen) … but hey, it is the tradition here and I am cool with that J Actually I have never heard of a fire happening because of the fireworks… There are quite a few people shooting off fireworks in our neighbourhood, so all you have to do is sit back and watch.

- An after Christmas Christmas present
I have been riding my little 250 four years now, and I love it, although the longer tours we take on our bikes the harder it is on our bodies – my 250 is not really a touring kind of bike if you know what I mean and my other half’s 850 Honda is on the small size to be comfortable for his over 6’ frame. I think I am ready to graduate from my ‘scooter on steroids’ to a ‘big girl’ bike J

Wouldn’t you know it, we end up at the Harley Dealer (surprised?) We each found a used Harley that we liked, but we left feeling that we should at least think about it. We drove a couple miles down the road and pulled off into a church parking lot (there are a lot of churches here, pretty much one on every corner) and started talking about it. I guess we talked each other into actually buying them – or it was divine intervention – (our reasoning: if we don’t do it now, we will keep saying next year, and we are not getting any younger…) We turned around and went back. It was surprisingly easy to trade our Canadian bikes at the Harley dealer – they did everything (we both had clear title on our bikes) They put temporary Florida tags and we drove off the lot on our Harley’s!

Ok, there was a little snag and I actually never rode mine off the lot. (sounded much more romantic the way I first said it) By the time we did all the paperwork the weather started to turn bad and dark rain clouds rolled in. I was not very comfortable riding a ‘new’ bike for the first time in a rain storm, so my ‘honey’ being the ever sweet guy he is drove his bike all the way home in the rain and picked up the truck and trailer so that we could get mine home J

What kind of Harley’s did we get you may ask?
I got an Sportster (883 low) 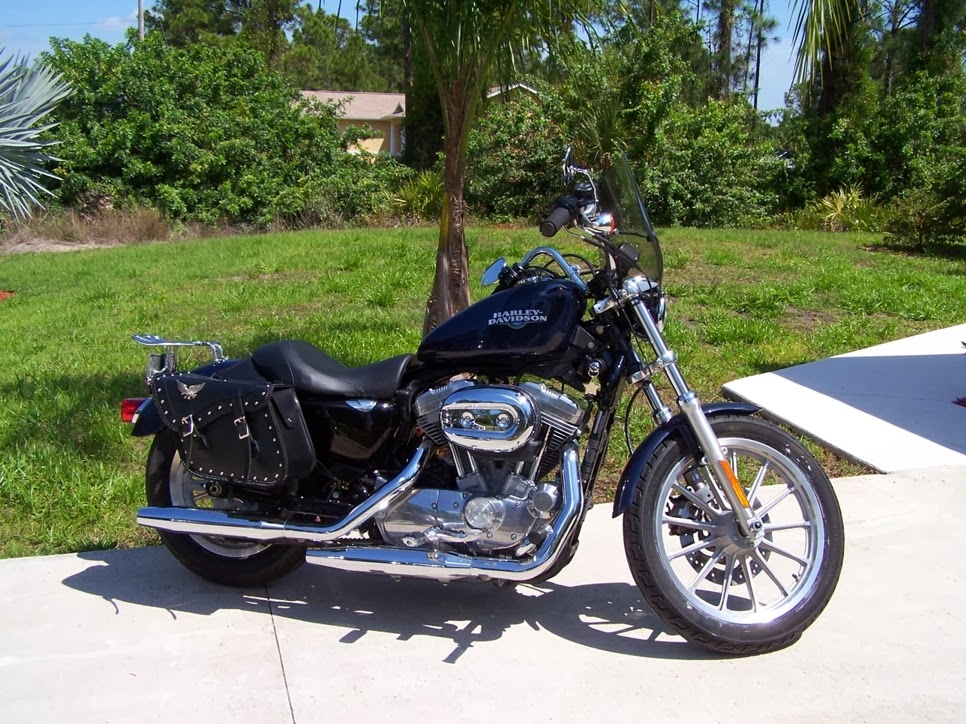 and he got a Superglide 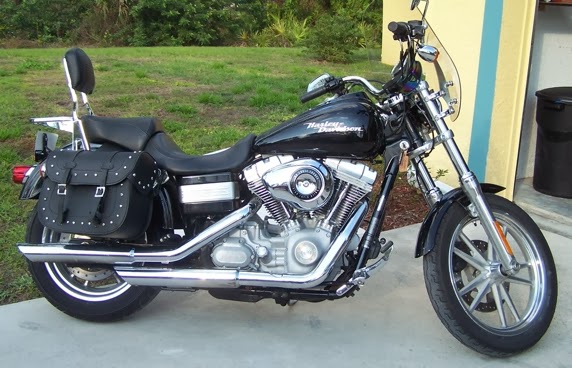 - Motorcycle Tours
Stopped at Lake Istokpoga on our way to Lake Placid – very nice ride, even kind of got lost and found some nice roads – drove through a little place called Old Venus, supposed to be haunted if you believe the Internet, but we managed to drive through without incident J 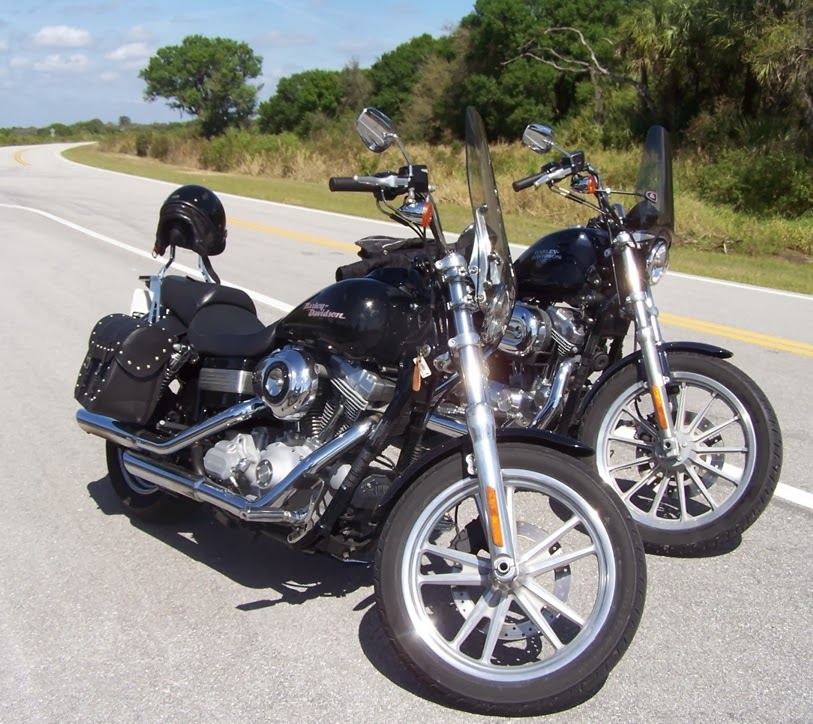 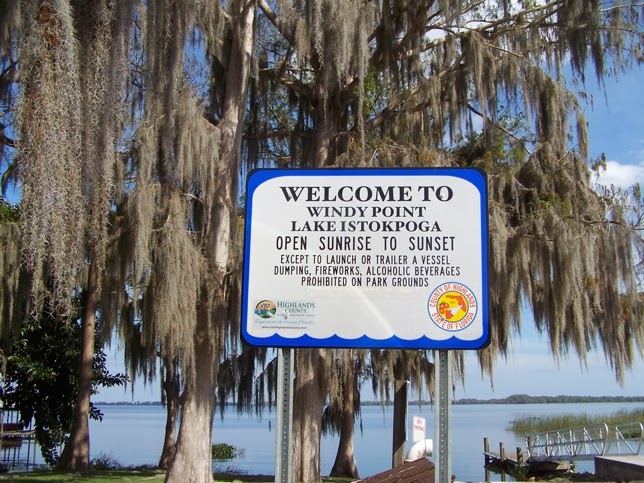 Took another shot at Lake Okeechobee, this time took route 78 through Moore Haven, got to about Fisheating Bay then turned around, it was getting late and another couple who had stopped there told us that it was a good days trip to make it all the way around the lake – next time…

We always take a tour through Fort Myers beach; it is a nice ride. Note to self, remember not to do that tour during March break - you might as well get off your bike and walk it at that time of year…

Went to the Shrimp festival in Everglade City, wow it was like a bike convention there, I swear there were more bikes than cars… for such a little town it puts on a really nice festival.

Labelle also had a nice festival called the Swamp Cabbage Festival, it was a nice ride out there. I had never seen an Armadillo race before…

[Note to self: must remember to take more pictures...]

- The Goodbye
Awww, seems like we just got here and it is time to go...

Aaaah, so much snow…. Will it ever end…