*Note: If you are new to my blog may I suggest you read "the back story on the Frozen Canuck" first - Also you might want to start from the bottom up in the blog archives list to the right of the page*

We finally did it! We went to our first ever ‘meet up’  with the Rebel Riders. The weather conditions were just right, for me. ;)

Not only was it my first ‘meet up’, it was my first time riding in an actual group! Up till now it was always just myself and my other half. There was a group of seven of us altogether (that is including myself and my plus one) Ok, maybe it was not the largest group of bikers ever, but hey, it was a group non the less - I feel like such a ‘big girl’ now!


Now I know why bikers travel in large groups, makes you feel like you’re in a parade! LOL

Talk about a grand welcoming, the plan was for two of The Rebel Riders to come out to meet us at a gas station close to our home base and then escort us back to the meeting place. When four of them pulled in I felt more like royalty with an entourage LOL - Gee, I felt so special  J

So we headed to the scheduled meeting place, and met up with one more before we headed out to our planned tour. The destination was to have lunch at the ‘Ragged Ass Saloon’  (yes, that is the actual name of the place!) in St. James City on Pine Island.  Did they really call this tiny little sleepy fishing village a city?  I was pleasantly surprised to find out that there is more to Pine Island than we had originally thought!

[An interesting ‘tid bit’ about Pine Island: Pine Island is the largest island (18 miles long, 2 miles wide with five unique communities) off Florida's Southwestern Gulf coast. Pine Island is home to four unincorporated towns: Pine Island Center, St. James City, Bokeelia, and Pineland. Matlacha also is considered one of the communities, but is on its own small island.  Pine Island has a small town atmosphere, with no traffic lights and mostly agricultural zoning. There are no large beaches and it is made from the same coral rock as the mainland. It is surrounded by mangroves and includes three aquatic preserves.] 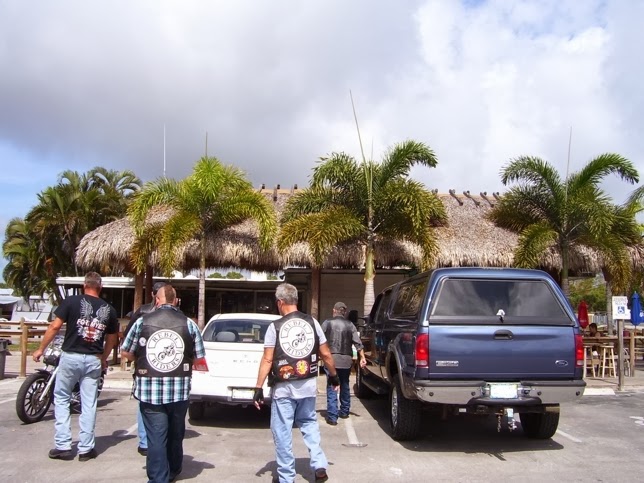 The Ragged Ass Saloon is a quaint little place situated by the water near a marina. It has a wonderful out door patio. We love patios!  (In Canada there are not many restaurants that have patios, it can get kind of chilly when it snows!) The outside patio is larger than the building and surprisingly busy, so don’t be in a hurry when you go there to eat. Just relax and take in the atmosphere, your on island time now!

(Obviously I am taking the picture) and yes I just happened to be the only girl on this ride….

Great bunch of guys! Very friendly and welcoming to us two Canucks J
Not that I am an expert on group rides... J but if you like a laid back ride then look these guys up! Thanks guys for letting us join you on this ride. We had a great time!

We have all heard of the saying ‘it is a small world’ well it truly is. The couple sitting across from us at the next table caught our attention because he was wearing a ball cap that said ‘Deerhurst’ (that is a popular resort in Huntsville, Ontario) My Honey went over to the guy and asked him if he was from Ontario, the guy was surprised and asked how we knew – We didn’t just know of Deehurst, it is practically in our back yard lol   Turns out they live very close by us back in Canada! And not only do they live close, they are also bikers! We will definitely have to look them up when we get back. Too bad they are only here for a short time this year and never took their bike.

Imagine that, we have to go to Florida to meet our Canadian neighbours. lol

Posted by the Frozen Canuck at 4:48 AM